Kim Kardashian Told North West About The Night She Was Conceived, And Her Reaction Was Very Understandable

"We take these allegations very seriously and have taken the decision to launch an independent investigation of the matter immediately to address the allegations."

Instead of the Kravis wedding, Kimye drama, and Pete Davidson we got… a peacock farm and Kris Jenner’s hip replacement.

“Even when he was at the height of not speaking to me and being angry with me, he won a few Grammys and I still reached out to him.”

There’s been a long-standing battle between Kim’s exes — Ray J and Kanye West — over who owns her sexual image. The reality is no one but Kim does, and yet we’re all still fighting over it.

Former Yeezy staffers have made a string of shocking accusations about the “abusive office culture” that Kanye created at Adidas.

“But then I had this thought: Maybe I can get him off of Kim’s case. Maybe I can distract him, like, just get him to like me.”

So many banned videos.

If you thought her past antics were wild, this new late-night interview was full of some seriously funny "un-cuh jams."

Just a few years ago, you were seeing Julia Fox in a few hotly tipped movies, and now she's not acting as much. She has an idea about why.

“I remember the dress rehearsal where he tried his dress rehearsal version of that, and I heard it, but there was music playing still so people were, like, sitting there and vibing."

It’s a good thing Kim has North to keep her humble, right?

Amy's comment came in the middle of an anecdote about her husband's autism spectrum disorder diagnosis.

“The tea is this was one of the outfits he styled and picked out. If you guys knew that, and if we were together, you guys would think it was the coolest outfit in the world.”

Kanye West Destroyed His Billion-Dollar Empire In Just Three Weeks. Here’s How He Did It.

Ye has targeted minority communities with hate speech and dangerous rhetoric, and now the Yeezy empire has unraveled.

West previously bragged that he could make antisemitic comments and that the German brand could not sever ties. That no longer appears to be the case.

MRC Entertainment also told employees it was shelving a completed documentary on the rapper to avoid amplifying his platform.

The reported decision by Vogue and Anna Wintour to sever ties with Kanye West comes as the rapper continues to deal with the consequences of antisemitic comments and other racist antics.

Schwimmer previously wrote, "Whether or not Kanye West is mentally ill, there's no question he is a bigot. His hate speech calls for violence against Jews."

Trevor Noah Was Asked Why He's Beefing With Kanye West, And His Response Is Not What I Was Expecting

"I’ve never beefed with Kanye West. I was concerned about Kanye West.”

Taylor Swift Has Given Details Into The Conflict, Love, And Anxiety In Her Relationship With Joe Alwyn On “Midnights,” And Across Her Last Four Albums

You might think that Taylor Swift and Joe Alwyn's relationship is super private. But she's been weaving details of their lives together across her last four albums. Midnights gives us more context than we could've wished for.

"Now she gets the house, gets the kids, gets the pride, picture me thick as thieves with your ex-wife."

Fans have expressed their outrage at Kanye for repeatedly hinting that Drake has slept with Kris Jenner, aka the mother of his ex-wife, Kim, and grandmother of his four children. 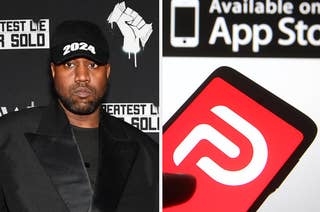 A source close to Kim claimed that she’s “had enough” of Kanye’s “conspiracy theories” and “hateful rhetoric,” and her family members have reportedly chosen to distance themselves from him, too.